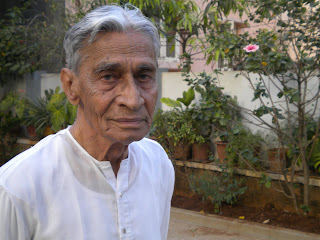 I read an article in The Hindu last week on V.K. Murthy, the legendary cinematographer of films are like Pyasa and Kagaz Ke Phool. He has just been awarded the Dada Saheb Phalke Award, the highest honour for anyone from the Indian film industry.He is the first cinematographer to be winning the Phalke award. After reading the article I wanted to spend an afternoon listening to his stories. Given that Papa ajoba is in Bombay and I am in Bangalore, entries for this blog have been drying up.I was lucky that V.K. Murthy lives in Bangalore. After a few phone calls I got myself an appointment with Mr. Murthy for Sunday afternoon.

I spent over two hours listening to him. I will try and recount the interview in the next few posts, in the coming weeks.

PART 1: Meeting Guru Dutt
Mr. Murthy was the first employee of Famous Studio in Bombay. In 1948 Mr.Murthy had gone to meet its Marwari owner Mr. Rungta who had just taken over from Siraj Ali Hakim. Hakim who had wanted to start Bombay's first air conditioned studio, built Famous but had to leave India soon after partition. Mr. Rungta who had financed the building of Famous Studios, now had to take over. He knew little about the intricacies of film making but when Murthy demanded Rs.250 as assistant cameraman, the Marwari flatly refused. Murthy who had been sent there by Fali Mistry struck a deal with Rungta saying that if Fali-Sahib said he should be paid Re.1 he would agree to even that. Finally Rungta employed Murthy for a monthly salary is Rs.175. Murthy's first task at Famous was to double check the film equipment that had already been bought. Murthy says, " according to the list, there were supposed to 25 lights but there were only ten and four Mitchel cameras had been purchased but there was only one!"

For four years Murthy worked with Famous as an assistant to Fali Mistry, Jal Mistry. He says,"in those days one had to work with which ever producer worked with a certain studio.But later some people started bringing their own cameramen. So one day Dev Anand and Guru Dutt came to Famous. They had an understanding (Guru Dutt and Dev Anand) that whichever one of the two would become successful first, that person would help the other get work. So naturally Dev Anand being an actor became successful faster than Guru Dutt and he gave Guru Dutt his first opportunity to direct Baazi."

Murthy continues, " the cameraman for Baazi was Dev Anand's cousin a certain Mr. Ratra and I was to assist him.Ratra was a happy go lucky fellow. During Baazi I watched very closely how Guru Dutt worked, with careful attention to characters, script and I enjoyed working with him very much. While we were shooting Baazi, I made a suggestion to shoot a song interlude in a certain way. Guru Dutt loved the idea and asked Ratra to shoot it that way.But Ratra was hesitant to take that shot since it had complicated camera movement. I wanted to ask them to let me shoot it but how could I? But Ratra himself said since it is Murthy's idea let him shoot it. So there I was shooting for Guru Dutt. But before I started shooting I told them I would go on with as many takes as I needed to get it right. I was lucky I should say, since the very first take was OK and for safety we took one more. That evening after pack up Guru Dutt came and said to me, Murthy yourself and myself will work together from the next picture onwards, for always. So that's how I got a break...all Guru Dutt films I did, from A to Z."

Hi, From Pune , Glad to read your post,
and wish to read all about your meetings with Murthy Saab, am a researcher in the field of early cinema and would very much appreciate if his address could be made available to me for further research. Thanks, siddharth

Siddharth: If you give me your email id I can pass on Mr Murthy's phone number to you. I dont think it is right for me to post it on the blog. Thanks

Hi can you please pass on Mr Murthy's number to me. Iam working with the new indian express.. would like to interview him...my id is jananisster@gmail.com