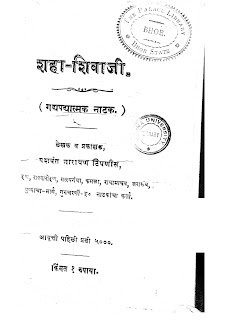 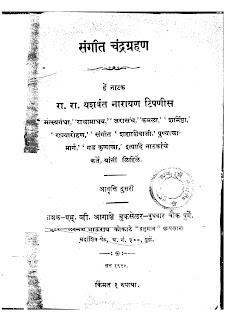 I found the first page of two plays written by Yeshwantrao Tipnis on the IISC, Bangalore website. The preliminary indication of where his other plays might be.

The first play is called Shah-Shivaji (meaning Shah- Sivaji) and the second is called Sangeet Chandragrahan (This literally translated means A Musical Lunar Eclispse, however I must understand the context of the play to know what it is a metaphor for.)
Posted by Anuja at 4:21 PM 3 comments:

Recently papa ajoba, took a long road trip deep into the Konkan region of Maharashtra. He and the rest of his siblings went to Mahad. While some of his siblings had grown up there, Papa ajoba was going back for the first time since 1935. The occasion, the auctioning of their ancestral land. Mahad is a small town in the Raigad district of Maharashtra, best known as the place where Ambedkar delivered his historical speech, giving the Dalit movement an impetus.

Papa ajoba's father was Madhavrao Tipnis and his uncle was Yeshwantrao Tipnis, one a successful actor and the other a well known playwright and director had started their theatre company, called Mahatrashtra Natak Mandali in Mahad. The theatre company was well known for its socially relevant plays, that were often banned by the British. While my great grandfather often played women characters, my great-grand uncle was known for the explosive dialogues he wrote.

I found to my surprise on the Maharashtra Government website's Gazetteer Department page, the mention of Madhavrao Tipnis. It listed the men who had significantly contributed to the region called Kolaba, now known as Raigad District. It said :

Thus a vacuum was, as it were, created in the social life of Kolaba, and although a number of illustrious persons, who later distinguished themselves in Bombay, hailed from Kolaba, the region did not get the benefit of their leadership. The late Mr. Rambhau Mandlik of Pen (1881-1958) who was for many years a member of the Bombay legislature was known to be a fearless constitutional fighter against the British Government, and he often made the Government officers uneasy in their seats by his persistence in pursuing a cause once taken up by him. Amongst some of the men of literary fame, we may note the late Mr. Sankar Balkrsna Diksit of Revadanda, the author of 'Jyotir-vilas', the late Mr. Balkrsna Anant Bhide, a well-known Marathi Scholar of Murud-Janjira and the late Principal G. C. Bhate, an active advocate of social reform coming from Mahad. The late Mr. S. M. Paranjape, champion of revolutionary nationalism and the editor of a weekly Marathi journal 'Kal' belonged to Mahad and the famous actor of Maharashtra Natak Mandali, Madhavrav Tipnis also belonged to the same place. In recent years Dr. Am-bedkar made Mahad as if it were his home town and started his famous satyagraha of the untouchables in 930 for asserting their right of being allowed to take water from 'cavdar tale'. It was a historic incident. It may also be noted in passing that Mahamahopadhyaya D. V. Potdar, Mr. C. D. Deshmukh. the ex-Finance Minister of India, also belong to Kolaba district.

In an attempt to trace my past and family history I had started recording stories that my grand father told me. But what lies virtually undiscovered is the history of his father's traveling theatre company, the Maharashtra Natak Mandali. From now I will try to piece together the history of this company through the photographs, documents and of course (cell phone) conversations with papa ajoba.
Posted by Anuja at 3:21 PM 2 comments: