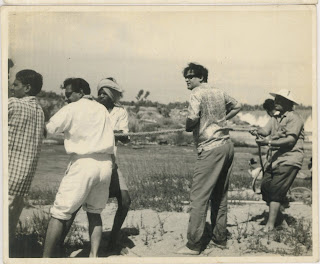 This photo is taken during the film Rajkumar and this was on the day they were shooting the song "Aaja aayi bahar...". The song required small boats to float around rhythmically. In this photo the director K.Shankar (extreme right with the round hat), Shammi Kapoor and my grand dad (in all white with the sun glasses extreme left) are helping steer these boats.
Posted by Anuja at 2:39 PM 1 comment: 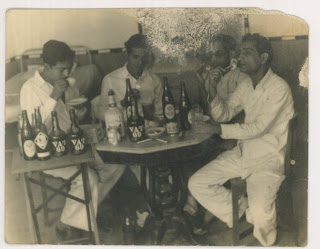 On holiday with friends at Daman during prohibition days.

I had heard of VAT 69 but was not quite sure of what it was, so I decide to ask my grand father. He replies impishly ," its a costly whisky".
This photo was taken when he and his friends were on holiday at Daman.Due to prohibition in Bombay they used to have to go to Daman which was still under the rule of the Portuguese for a "boys night out".They also came back with several bottles of perfume called Evening In Paris. He said the perfume was duty free in Daman and cost about Re. 1.50/- versus Rs.60 in Bombay. Incidentally about a decade later Papa ajoba was the make up man on a film with a similar name, An Evening In Paris, starring Shammi Kapoor and Sharmila Tagore.
In this photo my grand father is on the extreme right and then Jagtap Dada- Chief recordist for Filistan, Mr. Pathak- Also a sound recordist for films like Bees Saal Baad, Sholay.
Posted by Anuja at 2:04 PM No comments: 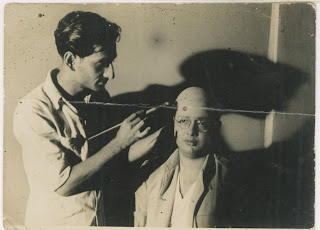