Death of the Archive 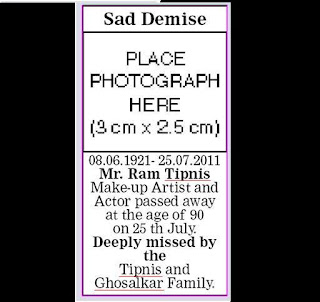 We celebrated Papa Ajoba's 90th birthday on 8th of June 2011. It was a small get together with very close family and friends. A month later on 8th of July I was passing through Bombay and for a reason completely unknown to me,I decided to record Papa Ajoba. He spoke passionately and coherently about the filmi mazdoor union and how the workers had organised themselves to form a union to make demands from their studios and producers. He said that the union had started at Famous Studio in Mahalaxmi, Bombay and the union had even produced a film. The conversation continued to other things like the Indian National Theatre (INT) and his theatre days. I returned to Bangalore only to go back the following week, for what was to be my last week with my grand father.

He contracted malaria and then pneumonia and passed away on the 25th of July at 8.30 a.m. 2011. It has taken me me three weeks to bring myself to post it on this blog. Mainly because of my own inability to accept the fact that he is no more.(If I have the courage to transcribe his last conversation with me, I will post that too.) But this morning as I woke up and read the news of Shammi Kapoor's death, I felt that this post had to be written. That this is a strange coincidence:two artists, collaborators, who worked so closely for over 30 years, spent many mad and memorable times on film sets, die less than a month apart. My mother had called Shammiji, informing him of my grand father's death, Shammji was not able to come to the phone due to his own ailing health. But his wife had said to my mother on hearing the news, "we have lost a family member".

For the next few days the TV channels will pay tribute to Shammiji and in the coming years, TV channels will dedicate several shows to Shammiji. I will watch those over and over again, for every image of Shammiji I see, I will see Papa Ajoba, standing outside the periphery, watching the shoot, cracking jokes with his co-workers, enjoying his work and doing what he loved most, making other people look good. Papa Ajoba was a rockstar and I miss him.