On the first day papa ajoba warned me that a few years ago (almost 15-20 years or so) a writer named Mr.Kunthalkar wanted to do a story in Screen on the technicians in Hindi Cinema and he called the article, ‘they also served’. Kunthalkar approached my grand father and asked him for an interview. Papa ajoba flatly refused saying that he didn’t want to be an also ran. So when I start talking to him he makes it absolutely clear that he is the protagonist and must not be a secondary figure. Talk about an empowered subject. So we begin, me my protagonist and his stories…

A brief background:
Papa ajoba was born on 8th June 1921 in Mahad. His father Madhavrao Tipnis & his uncle Yeshwantrao Tipnis started a theatre company called the Maharashtra Natak Mandali (1904) and did prose plays. (*Prose plays versus the popular form of marathi theatre called Sangeet Nataks or musicals. A famous star of the musicals was Gandharva) Papa Ajoba traveled with his fathers’ theatre company till he was eight. After which he had to go to school in Pune. In school he was the oldest boy in Kindergarten. But he was often cast in plays because of his father. So in a sense he was acting on stage before he was reading or writing. Papa Ajoba used to memorize his dialogues by making his older brother read them to him.

At the age of about 20(around 1940) papa ajoba had to start looking for work in order to support his 7 siblings and ageing parents. One of the big reasons for the decline in their living conditions was the arrival of cinema, especially the talkie. His father’s theatre company in it’s hey day had about 60 to 75 people: actors, their families, technicians, even chefs and barbers. But by the end of the 30’s most theatre companies started to close. Papa ajoba says, that, “the audiences were really attracted by the talkies. In the cinema they could see a variety of things, new places. It was a new medium that people got attracted to and most theatre companies started closing down. My father used to do at least 30 shows a month. Now he was reduced to doing only show a month. It was a hard time for us. Since I had failed in SSC I decided to look for work and support my family.”

For a while he played in a boy scout’s band and earned about a rupee a night. He acted in plays that were shown in clubs. One day when was acting in called Paisach Paisa (Only Money) written by Madhavrao Joshi, he heard that an older play called Municipality also written by the same playwright was being made into a film by K.Narayan Kale & Bapurao Apte. of Brilliant Pictures. So Papa ajoba went to Madhavrao Joshi and asked him for a recommendation letter. The reco read, “ he is a good boy and his father is a well known marathi stage actor.” Armed with the letter he went to Mr. Vasant Thengdi who was the lead actor as well as the production in charge for the film. He told papa ajoba to look after the props while the actors rehearsed before the shooting schedule started. So he was like the 4th or 5th assistant director in today’s times. When the shooting finally started for the film he was made an assistant to the make up man Mr. Bhaurao Datar. Along with make up he was also given an acting role of about 5-6 scenes as a lawyer for the Municipality.

The film was not a success, at least not as much as the original play had been. Brilliant Pictures closed down. So papa ajoba went back to doing plays at an amateur level, a step down for a man from a family of theatre veterans. He got paid about ten rupees a night on a good night and sometimes nothing at all.

In the meanwhile papa ajoba was approached by Dada Paranjpye who had quit Prabhat with V.Shantaram and was moving to Bombay to join Shantaram in his new studio called Raj Kamal. Dada Paranjpye also worked as make artist in Shankar Sarnaik’s theatre company but shifted to film after the decline of that company. He told my grand father, “ I am getting to do a Leela Chitnis film in Bombay why don’t you come and assist me?” Papa Ajoba thought that to be a good prospect as he had an uncle’s house to live in Bombay. Thus started papa ajoba’s tryst with Bombay: as an assistant make up artist on Kissi Se Na kehana in 1941 with a salary of Rs. 25.


Some other thoughts:
I am very aware that my grand father is old (85) and there might be concerns that his memory is failing. But he is very lucid and has a great memory. For e.g. while he was telling me about the coming of colour in Hindi cinema he named a foreign camera technician who had come to Filmistan to help with transition to colour. Papa ajoba said that his name was Chinn and he was a second unit cameraman on Treausre Island. Of course the cynic that I am, I didn’t believe him and I did an IMDB search and it revealed the truth. Also one of the discussants at Sarai had suggested that I ask him to retell the stories, which I am doing and as luck would have it he was interviewed by Mumbai Mirror and he actually said a lot of things to the journalist he had said to me in the past.

Some asides while chatting with Papa Ajoba:He used to watch silent film shooting at Aryan Film company in Pune and the leading heroine there was named Ambu. Ambu later came to be known as Lalita Pawar, greatest character actress of the India film industry.

When Himanshu Rai of Bombay Talkies fired the hero for their film Achut Kanya, a certain Mr. Najmal Hussein he was replaced by one of the ‘educated boys’ who worked in the processing lab called Ashok Kumar.
Posted by Anuja at 8:31 PM 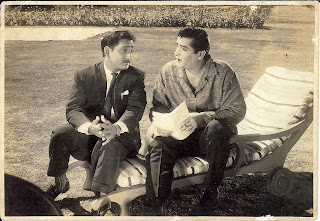 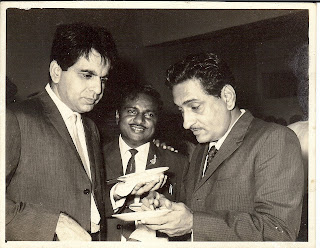 Below are some photos that I have started scanning.My Second post is a bit delayed but will be up soon. One is a photo of my grand dad with Dilip Kumar at a party and the other is with Shammi Kapooe during the shooting of the film Janwar (1965)
Posted by Anuja at 3:42 PM No comments:

I am Anuja Ghosalkar, I have been a lecturer and researcher in film in Bombay for the last five years. I have also been involved with an experimental theatre group in Mumbai for over half a decade, called The Company Theatre. All of last year I was a research associate with Rosie Thomas who was writing a book on early Indian Cinema and the Stunt film. I have also been a co-curator of Made By Women, an international women's film festival. I am currently working with Breakthrough – a globally active human rights organization.

My research project is on my grand father who I call Papa Ajoba, which is also the project title.

This project will chronicle the life of my grand father, as a make up artist in the Hindi film industry from 1941 to 2000: from his early years at Raj Kamal studio with V. Shantaram (when they literally made their own make-up) to his 17 years spent at the Filmistan studio. There will be a sharper focus on the 1960’s - when he predominantly worked with Shammi Kapoor, Asha Parekh, Sadhana & Saira Banu. It will also document film history from the point of view of a technician who might lacquer it with his own stories. It is finally, a tribute to a grandfather who narrated stories of his everyday life, not knowing that stories often become history.

The research will primarily be through interviews, previously published books on the history of Indian cinema and material from magazines like Film India , Rangabhoomi, Screen, etc.

The presentation will be in an audio-visual form with a written thesis.

Update on the Research: I have just finished recording one, one hour audio tape with my grand father with some basic information of him and industry. I just realized that even though I have lived with him all my life, there are so many things that I did not know, I now need to transcribe the tape and do some more recording.

So that’s where I am at right now… getting started hesitantly but also with a sense of great excitement.
Posted by Anuja at 3:38 PM 8 comments: