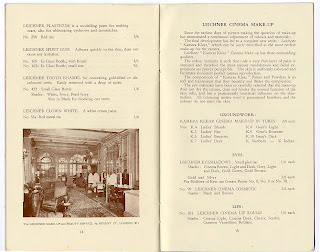 Around 1942-43 when Papa ajoba joined Raj Kamal they used to make their own make up. Described below are the materials and the process by which they created colours & powders.

Coloured Foundation: We used to mix coloured powder that was used for painting houses with petroleum jelly in a doctor’s mixing plate with a knife that was flexible. Then we took zinc powder and mixed it with the coloured powders. After making the colour we would boil it, then strain it with cloth, then fill it in containers, so we had: whites, blue, blacks. These were the lining or the base colours.

Max Factor came to India around 1939 or 1940. Before that there was only one German Company called Leichner. We used to get sticks of colour from them but it was really hard. So used to take a little from the stick on our hands and then ‘pat on that make up’.

Max factor was expensive and our lining colours were better. Max Factor had tubes that were numbered. 21 to 31 for the Indian skin, ladies used numbers 27, 28, 29 and for the gents we used 30, 31.

Right at the start around 1904 in theatre they used use powders and water and we used to call it water painting. They used to use this water paint on their hands and face. Therefore the theatrical white make up in early theatre and also early cinema. For.e.g. in Phalke; films the faces look white. This was also because in early days the lights, both in theatre and cinema were not so powerful and the bright white faces caught the light better.

At a point in time grease used to be mixed with coloured powders or paint. But big theatre stars like Bal Gandharva used ‘loni’ i.e. homemade butter to mix the colours instead of grease.

Coloured Powders: The coloured powders were made of French chalk which is white in colour. You had to grind the French chalk and make sure that there were no solid particles and the powder had to be soft. Then to that powder we would add whatever colour that we wanted.
Posted by Anuja at 1:32 PM No comments: 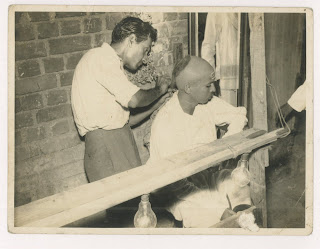 Brief background of Geva Colour as Papa Ajoba explained it:

Technicolour means it is made up of three colour negatives instead of two in black and white. Ambalal Patel of Film Centre in 1950 brings the agency of Geva colour to India. But the film was very thin and had a yellow tinge. The film needed lots of 5KW & 10 KW lights. If while shooting a 1% shadow was registered after exposing the film it would show up as a 10 % shadow so to avoid shadows people would use very bright lights. In 1950 & 1951 they started taking the Geva Colour tests. They realized that due to the bright lights the artist’s skin started burning and they needed to keep an ice box on the set and use Chamois leather. In order to test a Long Shot on Geva colour they went all the way to Prabhat studio in Pune as the studio had many lights as well as generators. They also shot an outdoor close up in Pune and Papa Ajoba seems to suggest that the outdoor light in Pune is stronger than the light in Bombay.

An all British crew was shooting a film called Bombay Flight 470. The crew was also testing the colour film. Mukherjee Saheb told papa ajoba to be an assistant to Jimmy Vinnig who was a leading make up artist. Papa Ajoba was introduced to J.V. and they exchanged pleasantries. But when Jimmy started his make up he said to papa ajoba, “Mr.Tipnis I don’t allow anyone in my make up room”. Papa ajoba left the make room and went and sat in the park. In the meantime Mr.Mubarak, the actor shows up and asks Papa Ajoba, “why are you sitting outside?” Papa ajoba narrates the incident to him and Mubarak says to him, “you come with me and I will see how he’s not letting you in.” He then goes and confronts Jimmy and Jimmy admits to have told my grand father to leave. Mubarak then says, “Mr. Vinnig, Tipnis has done 4 films in Geva colour and the results are better than yours in the film Mayurpankh. Papa Ajoba concludes this story by saying that “Jimmy Vinning apologized to me and after that Geva was widely used”.

The make man and the Camera man:

Papa Ajoba says that the best judge of the make up is the Cameraman (he insists on calling the director of photography as we know them today as cameramen). He says, “If anything went wrong they ( the cameramen) would guide us. The guidance by a good cameraman is essential for the make up man”. Some of the name he takes are Dwarka Divecha who was the cameraman for films like Sholay. Then he worked closely with Fali Mistry and Jal Mistry, Radhu Karmarkar and G.Singh. He also worked in close association with N.V.Srinivas who was the cameraman on most of the Subodh Mukherjee films.


I have continued transcribing and here I continue from where I left off. He starts off by talking about Junglee and deviates to talking about coming of colour with a reference to the film Nagin. I look up the films in encyclopedia of Indian Cinema for technical notes. It reveals that the 50’s from Jhansi Ki Rani in 1953 right upto Junglee (1961) was very important for the consolidation the color film. Incidentally papa ajoba talks about this decade by chance.

AG: You were telling me about Junglee?

PA: han, yes Junglee I haven’t done it. You know what happened in Kishore Sahu’s Company I had kept Dinoo Indulkar and Ram Patrivar. So after a few years that company shut down. So Dinoo came to me so then I took him on at Filmistan, that time we had done Nagin picture partly in color.

AG: what do you mean partly in color?

PA: Partly means half, the last part almost was in color. But before that we had taken many trials in color, with color. In the year 1950 (pause) ummm…that…ummm whose that…ummm he had a laboratory ummm Film centre, the man who owned film centre. I forgot his name he was big man. So he himself used to bring that Geva color film to Filmistan and we had done trials with that. That Geva colour was so slow that we needed lots of light 5 K and 10 K as there were no other lights and the actor used to be very troubled because his skin would burn. So we used to keep an ice box on the set and keep pieces of Chamois leather…means Camel’s skin. But now days you get artificial also, with that we used to soothe the artist’s skin.

P.A: When color first came. There was Ambalal Patel, Ambalal Patel of Film Centre, he himself used to come with the film.

AG: Of Film Centre? He developed and brought it?

PA: Yes, he had taken the contract. The Geva agency was with him. It used to be very slow but then gradually after processing it became okay. I will tell you a story about the film Nagin.

AG: But wait please tell me about what changes had to be made in the make up styles due to the coming of color.

PA: That’s what I am telling you. So when we were taking a test for the film, there was an English cameraman called Chinn.

PA: Ya. Chinn. He was one of the cameramen for the film Treasure Island. You know they have different cameramen for different units, so he was the one who told me, “ Mr. Tipnis…”

AG: So he was the cameraman for Nagin?

PA: No! the company brought him.

PA: For colour. But he did not do any picture. Nagin picture he did…ummm..who is that cameraman?

PA: Fali Mistry Saheb had done it. Chin told me to make the make up lighter, on the lighter side. So do it like this…like that…(makes gestures with his hand ,as of he is painting) So I did it like that. But because the film was so slow the artist used to get troubled so the shooting did not happen. But later then Nagin became partly in colour and then film became much better.

PA: They did some procedure so when the first trial was done for Nagin on Vajantimala with the sets and all with colour. We saw it the next day and it had a lot of yellow in it. So Mukherjee Saheb said lets change the make up and bring that bring Jimmy Vining, so we will called him. And because I really wanted to learn, I said okay no problem, let’s call him. On the 3rd day what happened, Fali Saheb came to me and said, ‘ Tipnis we will do one more trial with Vaijanthiji. But I told him, “ but Fali Saheb, Mukherjee Saheb has said we have to call Jimmy Vining.” So Fali Saheb said to me, “ no no need, it is not your fault”. See the greatness of such a big cameraman. “its not your fault, its my fault.” Fali Saheb continued, “I took a little piece of film and went and developed, printed and corrected it. The make up you had done yesterday was correct. Let anybody say anything, don’t listen to them just listen to me.

AG: But what had gone wrong?

PA: Wait, I will tell you. You know what had happened there was a lot of yellow in that Geva colour. I had done it right so then Fali Saheb had put filters and all that and reduced it. Therefore then later we used to do pink makeup.

PA: To kill the yellow because the effect yellow on pink is not that much. That‘s why we had started pink make up. But then slowly Geva Colour went and Eastman came, so now days they can do natural make up.

PA: Junglee film was produced by Subodh Mukherjee. Should I speak in Hindi all the time? So then my own man Dinoo Indulkar who was working with me then, first I had kept him at Sahu Saheb’s company. But when Sahu saheb’s company shut down then he worked with me. So I kept him at Subodh Mukherjee’s because he had asked me, “tipnis give me a good man like you.” So Dinoo who was unemployed I put him there so that film was done by him.

* In 1933 Prabhat’s Sairandhri was processed and printed in Germany. So it is the first colour film seen in India.

* Kisan Kanya – 1st color film by Gidwani (1937) was India’s first indigenously manufactured colour film. After that Ardheshir Irani of Imperial had bought rights to the Cinecolour process and set up a colour lab.

While experiments in color might have continued but as we all know that India’s first Technicolour film was Jhansi Ki Rani, by Sohrab Modi (1953)

Then the next major color film was Mayurpankh 1954 directed by Kishore Sahu.

Nagin follows in 1954 directed by Nandlal Jaswantlal produced by Filmistan. Papa ajoba was a part of process of understanding the advent of the color film.

Mehboob Khan’s Mother India in 1957 is a remake of Mehboob’s 1940 film Aurat. The use of colour impacts the images created drastically.

In 1961 comes Junglee starring Saira Banu and Shammi Kapoor. It ran for 52 weeks all over India.
Posted by Anuja at 1:09 PM 1 comment: